Omeprazole belongs to a class of antisecretory compounds, the substituted benzimidazoles, that suppress gastric acid secretion by specific inhibition of the H+/K+ ATPase enzyme system at the secretory surface of the gastric parietal cell. Because this enzyme system is regarded as the acid (proton) pump within the gastric mucosa, omeprazole has been characterized as a gastric acid-pump inhibitor, in that it blocks the final step of acid production. This effect is dose-related and leads to inhibition of both basal and stimulated acid secretion irrespective of the stimulus. Animal studies indicate that after rapid disappearance from plasma, omeprazole can be found within the gastric mucosa for a day or more.

After oral administration, the onset of the antisecretory effect of omeprazole occurs within one hour, with the maximum effect occurring within two hours. Inhibition of secretion is about 50% of maximum at 24 hours and the duration of inhibition lasts up to 72 hours. The antisecretory effect thus lasts far longer than would be expected from the very short (less than one hour) plasma half-life, apparently due to prolonged binding to the parietal H+/K+ ATPase enzyme. When the drug is discontinued, secretory activity returns gradually, over 3 to 5 days. The inhibitory effect of omeprazole on acid secretion increases with repeated once-daily dosing, reaching a plateau after four days.

Results from numerous studies of the antisecretory effect of multiple doses of 20 mg and 40 mg of omeprazole in normal volunteers and patients are shown below. The “max” value represents determinations at a time of maximum effect (2 to 6 hours after dosing), while “min” values are those 24 hours after the last dose of omeprazole.

Single daily oral doses of omeprazole ranging from a dose of 10 mg to 40 mg have produced 100% inhibition of 24-hour intragastric acidity in some patients.

In studies involving more than 200 patients, serum gastrin levels increased during the first 1 to 2 weeks of once-daily administration of therapeutic doses of omeprazole in parallel with inhibition of acid secretion. No further increase in serum gastrin occurred with continued treatment. In comparison with histamine H2-receptor antagonists, the median increases produced by 20 mg doses of omeprazole were higher (1.3 to 3.6 fold vs. 1.1 to 1.8 fold increase). Gastrin values returned to pretreatment levels, usually within 1 to 2 weeks after discontinuation of therapy.

Human gastric biopsy specimens have been obtained from more than 3000 patients treated with omeprazole in long-term clinical trials. The incidence of ECL cell hyperplasia in these studies increased with time; however, no case of ECL cell carcinoids, dysplasia, or neoplasia has been found in these patients. [See Clinical Pharmacology (12)] However, these studies are of insufficient duration and size to rule out the possible influence of long-term administration of omeprazole on the development of any premalignant or malignant conditions.

Systemic effects of omeprazole in the CNS, cardiovascular and respiratory systems have not been found to date. Omeprazole, given in oral doses of 30 or 40 mg for 2 to 4 weeks, had no effect on thyroid function, carbohydrate metabolism, or circulating levels of parathyroid hormone, cortisol, estradiol, testosterone, prolactin, cholecystokinin or secretin.

No effect on gastric emptying of the solid and liquid components of a test meal was demonstrated after a single dose of omeprazole 90 mg. In healthy subjects, a single I.V. dose of omeprazole (0.35 mg/kg) had no effect on intrinsic factor secretion. No systematic dose-dependent effect has been observed on basal or stimulated pepsin output in humans.

However, when intragastric pH is maintained at 4.0 or above, basal pepsin output is low, and pepsin activity is decreased.

As do other agents that elevate intragastric pH, omeprazole administered for 14 days in healthy subjects produced a significant increase in the intragastric concentrations of viable bacteria. The pattern of the bacterial species was unchanged from that commonly found in saliva. All changes resolved within three days of stopping treatment.

The course of Barrett’s esophagus in 106 patients was evaluated in a U.S. double-blind controlled study of omeprazole 40 mg twice daily for 12 months followed by 20 mg twice daily for 12 months or ranitidine 300 mg twice daily for 24 months. No clinically significant impact on Barrett’s mucosa by antisecretory therapy was observed. Although neosquamous epithelium developed during antisecretory therapy, complete elimination of Barrett’s mucosa was not achieved. No significant difference was observed between treatment groups in development of dysplasia in Barrett’s mucosa and no patient developed esophageal carcinoma during treatment. No significant differences between treatment groups were observed in development of ECL cell hyperplasia, corpus atrophic gastritis, corpus intestinal metaplasia, or colon polyps exceeding 3 mm in diameter [See Clinical Pharmacology (12)].

Omeprazole delayed-release capsules contain an enteric-coated granule formulation of omeprazole (because omeprazole is acid-labile), so that absorption of omeprazole begins only after the granules leave the stomach. Absorption is rapid, with peak plasma levels of omeprazole occurring within 0.5 to 3.5 hours. Peak plasma concentrations of omeprazole and AUC are approximately proportional to doses up to 40 mg, but because of a saturable first-pass effect, a greater than linear response in peak plasma concentration and AUC occurs with doses greater than 40 mg. Absolute bioavailability (compared with intravenous administration) is about 30 to 40% at doses of 20 to 40 mg, due in large part to presystemic metabolism. In healthy subjects the plasma half-life is 0.5 to 1 hour, and the total body clearance is 500 to 600 mL/min.

Following single dose oral administration of a buffered solution of omeprazole, little if any unchanged drug was excreted in urine. The majority of the dose (about 77%) was eliminated in urine as at least six metabolites. Two were identified as hydroxyomeprazole and the corresponding carboxylic acid. The remainder of the dose was recoverable in feces. This implies a significant biliary excretion of the metabolites of omeprazole. Three metabolites have been identified in plasma — the sulfide and sulfone derivatives of omeprazole, and hydroxyomeprazole. These metabolites have very little or no antisecretory activity.

Omeprazole 40 mg daily was given in combination with clarithromycin 500 mg every 8 hours to healthy adult male subjects. The steady state plasma concentrations of omeprazole were increased (Cmax, AUC0-24, and T1/2 increases of 30%, 89% and 34% respectively) by the concomitant administration of clarithromycin. The observed increases in omeprazole plasma concentration were associated with the following pharmacological effects. The mean 24-hour gastric pH value was 5.2 when omeprazole was administered alone and 5.7 when co-administered with clarithromycin.

Concomitant Use with Clopidogrel

Results from another crossover study in healthy subjects showed a similar pharmacokinetic interaction between clopidogrel (300 mg loading dose/75 mg daily maintenance dose) and omeprazole 80 mg daily when co-administered for 30 days. Exposure to the active metabolite of clopidogrel was reduced by 41% to 46% over this time period.

In another study, 72 healthy subjects were given the same doses of clopidogrel and 80 mg omeprazole but the drugs were administered 12 hours apart; the results were similar, indicating that administering clopidogrel and omeprazole at different times does not prevent their interaction.

The pharmacokinetics of omeprazole have been investigated in pediatric patients 2 to 16 years of age: 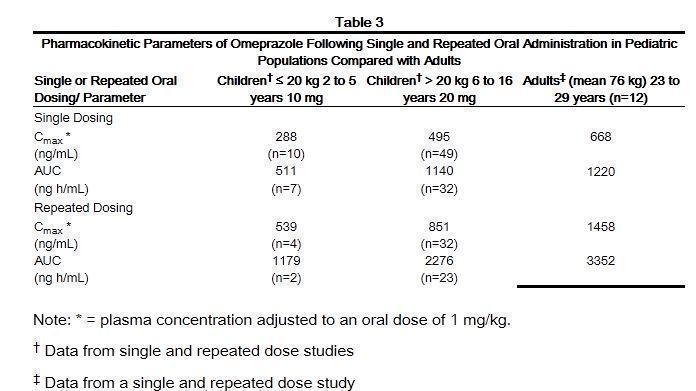 Doses of 10, 20 and 40 mg omeprazole as enteric-coated granules

Following comparable mg/kg doses of omeprazole, younger children (2 to 5 years of age) have lower AUCs than children 6 to 16 years of age or adults; AUCs of the latter two groups did not differ. [See Dosage and Administration (2)]

In patients with chronic hepatic disease, the bioavailability increased to approximately 100% compared with an I.V. dose, reflecting decreased first-pass effect, and the plasma half-life of the drug increased to nearly 3 hours compared with the half-life in normals of 0.5 to 1 hour. Plasma clearance averaged 70 mL/min, compared with a value of 500 to 600 mL/min in normal subjects. Dose reduction, particularly where maintenance of healing of erosive esophagitis is indicated, for the hepatically impaired should be considered.

In patients with chronic renal impairment, whose creatinine clearance ranged between 10 and 62 mL/min/1.73 m2, the disposition of omeprazole was very similar to that in healthy volunteers, although there was a slight increase in bioavailability. Because urinary excretion is a primary route of excretion of omeprazole metabolites, their elimination slowed in proportion to the decreased creatinine clearance. No dose reduction is necessary in patients with renal impairment.

In pharmacokinetic studies of single 20 mg omeprazole doses, an increase in AUC of approximately four-fold was noted in Asian subjects compared with Caucasians. Dose reduction, particularly where maintenance of healing of erosive esophagitis is indicated, for Asian subjects should be considered.

Omeprazole and clarithromycin dual therapy and omeprazole, clarithromycin and amoxicillin triple therapy have been shown to be active against most strains of Helicobacter pylori in vitro and in clinical infections as described in the Indications and Usage section (1.1).