The effectiveness of IGALMI for the acute treatment of agitation associated with schizophrenia or bipolar I or II disorder in adults was established in two randomized, double-blind, placebo-controlled, fixed-dose studies (Studies 1 and 2):

The Positive and Negative Syndrome Scale-Excited Component (PEC) is an investigator-rated instrument consisting of 5 items: poor impulse control, tension, hostility, uncooperativeness, and excitement. Each item is scored on a scale from 1 to 7 (1=absent, 2=minimal, 3=mild, 4=moderate, 5=moderate-severe, 6=severe, 7=extremely severe). The total PEC score ranges from 5 to 35, with higher scores reflecting greater overall symptom severity. For enrollment in the studies, patients had to be judged to be clinically agitated with a total PEC score of ≥ 14, with at least one individual item score ≥ 4. In both studies, patients were admitted to a clinical research unit or a hospital and remained under medical supervision for at least 24 hours following treatment.

Patients were randomized to receive a single sublingual dose of 180 mcg of IGALMI, 120 mcg of IGALMI, or placebo. The primary efficacy endpoint in both studies was the change from baseline in the PEC score, assessed two hours following the initial dose. The key secondary endpoint was the time to effect onset, assessed by measuring the change from baseline in PEC score at 10, 20, 30, 45, 60, and 90 minutes after the initial dose administration.

In both studies, mean baseline PEC scores were similar in all treatment groups (Table 5). The mean change from baseline in the PEC total score at two hours after the first dose in patients treated with 180 mcg and 120 mcg of IGALMI was statistically greater than patients who received placebo (Table 5).

Examination of population subsets (race and sex) on the primary endpoint did not show evidence for differential responsiveness between White and Black or female and male patients. The clinical studies did not include enough patients of other races or patients ≥65 years of age to determine whether there were differences in effectiveness for those groups.

Figure 1: Mean Change from Baseline in PEC Score Through Two Hours after a Single Dose in Agitated Patients with Schizophrenia (Study 1)

Figure 2: Mean Change from Baseline in PEC Score Through Two Hours after a Single Dose in Agitated Patients with Bipolar I or II Disorder (Study 2) 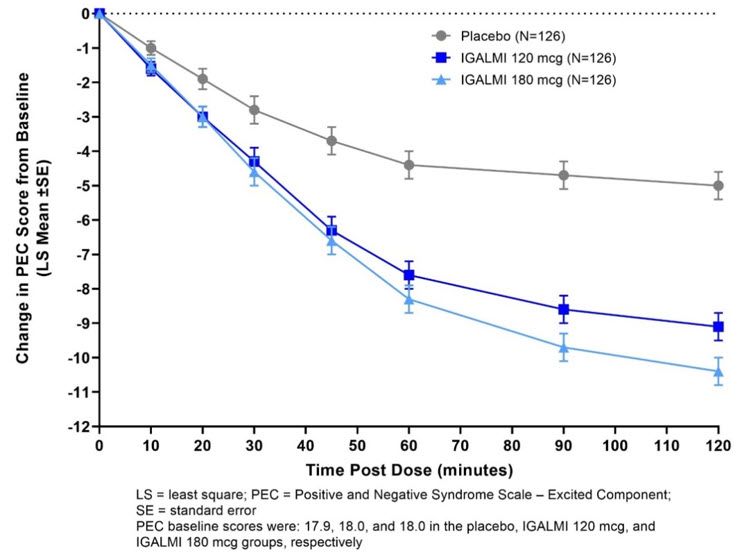