Study: Vitamin D and the ability to produce 1,25(OH)2D are critical for protection from viral infection of the lungs. Image Credit: Festa / Shutterstock.com

Low vitamin D status is associated with a poor prognosis in patients with acute respiratory diseases, such as influenza and the coronavirus disease 2019 (COVID-19). In fact, recent evidence has indicated that low circulating vitamin D (serum 25(OH)D, 25D) levels were associated with severe disease and higher mortality rates in COVID-19 patients. As a result, high-dose vitamin D supplementation has been recommended to reduce the severity of these infections.

The relationship between vitamin D levels and respiratory disease severity appears to be due to the antiviral activity of vitamin D that may be specific to each virus. For example, vitamin D, as well as its analogs, appear to induce the production of cathelicidin, which is an antimicrobial peptide that is released in response to viral infections. Conversely, vitamin D may also limit inflammatory responses by reducing interferon γ (IFN- γ), interleukin 6 (IL-6), and tumor necrosis factor α (TNF-α) levels.

Lung epithelial cells express the vitamin D receptor (VDR) and are regulated by 1,25D supplementation. Thus, vitamin D treatment has been shown to directly affect the lung epithelium and reduce the inflammatory response within the lungs.

The researchers in the current study sought to further evaluate the lung response of vitamin D supplementation in treating both H1N1 and SARS-CoV-2 infection in vivo. For the H1N1 studies, the researchers utilized two different strains of mice, of which included wildtype (WT) and CYP27B1 knockout (Cyp KO) mice. Taken together, age and sex-matched mice were fed chow diets, which contained vitamin D (D+) or purified diets with (D+) and without (D-) vitamin D.

The CYP27B1 gene ensures the production of 1-alpha hydroxylase, which initiates the production of 1,25D, the active form of vitamin D. Because Cyp KO mice are unable to produce 1,25D, the researchers were able to assess the effects of both H1N1 and SARS-CoV-2 infection in the presence of a severe vitamin D deficiency, as well as how vitamin D supplementation might improve the inflammatory response in this environment.

Taken together, vitamin D deficiency and the lack of 1,25D synthesis increased the vulnerability of mice to H1N1 infection. 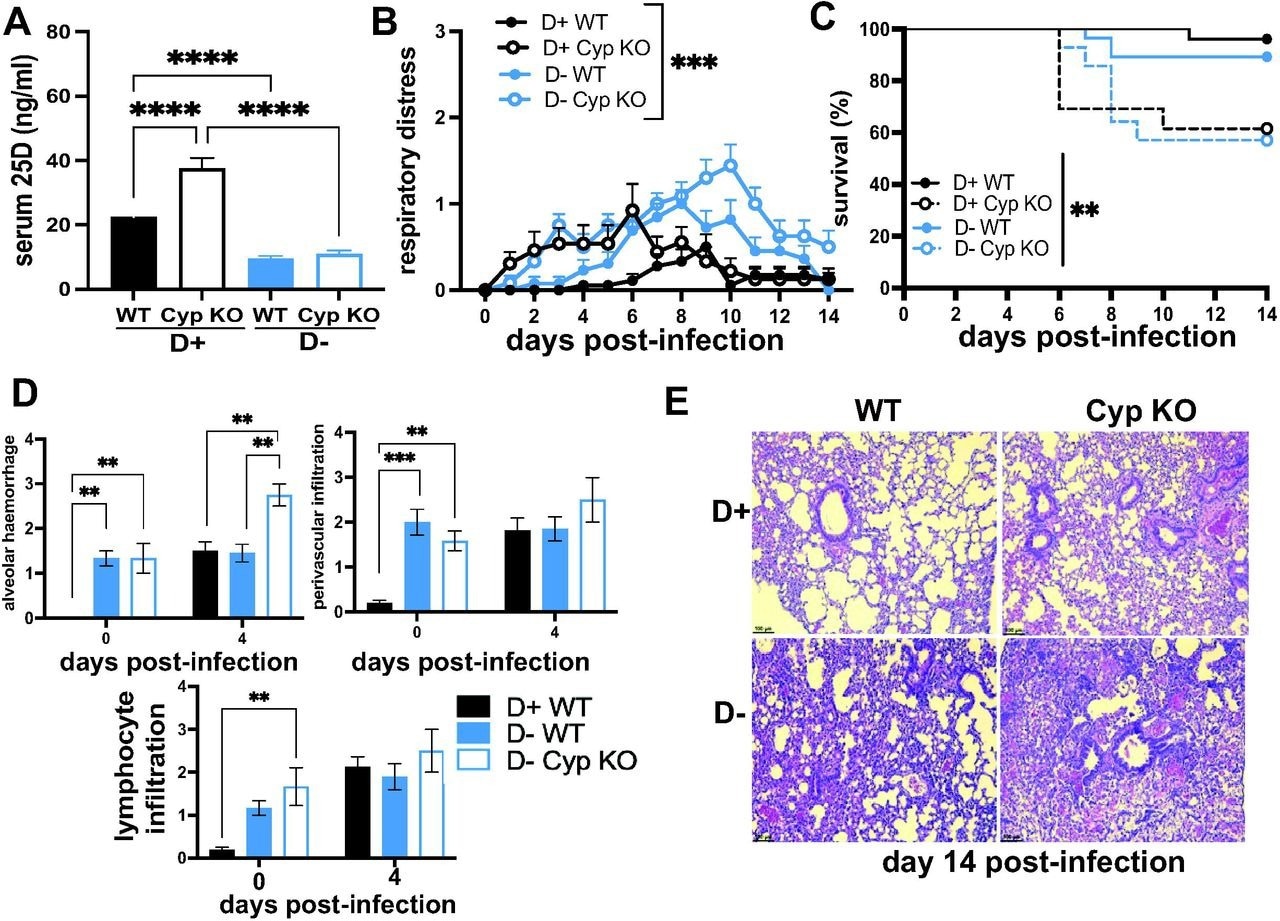 SARS-CoV-2 infection and the effects of vitamin D supplementation were assessed in mice expressing the human angiotensin-converting enzyme 2 (ACE2) receptor, which is the receptor utilized by SARS-CoV-2 to gain entry into cells. Since Cyp27B1 remained present in this mouse strain, some mice were given a vitamin D deficient chow for eight weeks prior to infection to induce a state of vitamin D deficiency.

To this end, serum-25D levels were comparable between hamsters fed on a chow diet (D+) and those fed on D- diets for four weeks. Furthermore, expression of the SARS-CoV-2 nucleocapsid (N) gene did not differ amongst D+ and D- lungs or colon.

A vitamin D deficient state appears to be vulnerable to viral infections due to the presence of pre-existing lung inflammation.

Taken together, the current study demonstrates that vitamin D supplementation reduces lung inflammation in mice infected with H1N1 and SARS-CoV-2. Notably, the beneficial effects of vitamin D supplementation in hamsters infected with SARS-CoV-2 were not remarkable. This lack of effect in hamsters may be due to the inability of commercially available chow to raise 25D levels.

Further studies are needed to describe the antiviral mechanism of vitamin D in preventing acute respiratory illnesses and the variations in effect if any, that its supplementation has in preventing H1N1 influenza and SARS-CoV-2 infection.

medRxiv publishes preliminary scientific reports that are not peer-reviewed and, therefore, should not be regarded as conclusive, guide clinical practice/health-related behavior, or treated as established information.