The efficacy of sumatriptan tablets in the acute treatment of migraine headaches was demonstrated in 3, randomized, double-blind, placebo-controlled trials. Patients enrolled in these 3 trials were predominately female (87%) and Caucasian (97%), with a mean age of 40 years (range: 18 to 65 years). Patients were instructed to treat a moderate to severe headache. Headache response, defined as a reduction in headache severity from moderate or severe pain to mild or no pain, was assessed up to 4 hours after dosing. Associated symptoms such as nausea, photophobia, and phonophobia were also assessed. Maintenance of response was assessed for up to 24 hours postdose. A second dose of sumatriptan tablets or other medication was allowed 4 to   24 hours after the initial treatment for recurrent headache. Acetaminophen was offered to patients in Trials 2 and 3 beginning at 2 hours after initial treatment if the migraine pain had not improved or had worsened. Additional medications were allowed 4 to 24 hours after the initial treatment for recurrent headache or as rescue in all 3 trials. The frequency and time to use of these additional treatments were also determined. In all trials, doses of 25, 50, and 100 mg were compared with placebo in the treatment of migraine attacks. In 1 trial, doses of 25, 50, and 100 mg were also compared with each other.

In all 3 trials, the percentage of patients achieving headache response 2 and 4 hours after treatment was significantly greater among patients receiving sumatriptan tablets at all doses compared with those who received placebo. In 1 of the 3 trials, there was a statistically significant greater percentage of patients with headache response at 2 and 4 hours in the 50 mg or 100 mg group when compared with the 25 mg dose groups. There were no statistically significant differences between the 50 mg and 100 mg dose groups in any trial. The results from the 3 controlled clinical trials are summarized in Table 2.

The estimated probability of achieving an initial headache response over the 4 hours following treatment in pooled Trials 1, 2, and 3 is depicted in Figure 1.


Figure 1. Estimated Probability of Achieving Initial Headache Response within 4 Hours of Treatment in Pooled Trials 1, 2, and 3a

aThe figure shows the probability over time of obtaining headache response (no or mild pain) following treatment with oral sumatriptan. The averages displayed are based on pooled data from the 3 clinical controlled trials providing evidence of efficacy. Kaplan-Meier plot with patients not achieving response and/or taking rescue within 240 minutes censored to 240 minutes.

For patients with migraine-associated nausea, photophobia, and/or phonophobia at baseline, there was a lower incidence of these symptoms at 2 hours (Trial 1) and at 4 hours (Trials 1, 2, and 3) following administration of sumatriptan tablets compared with placebo.


Figure 2. The Estimated Probability of Patients Taking a Second Dose of Sumatriptan Tablets or Other Medication to Treat Migraine over the 24 Hours following the Initial Dose of Study Treatment in Pooled Trials 1, 2, and 3a 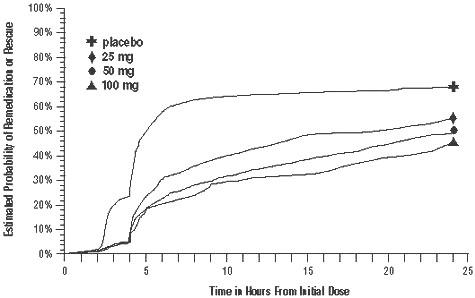 aKaplan-Meier plot based on data obtained in the 3 clinical controlled trials providing evidence of efficacy with patients not using additional treatments censored to 24 hours. Plot also includes patients who had no response to the initial dose. No remedication was allowed within 2 hours postdose.

There is evidence that doses above 50 mg do not provide a greater effect than 50 mg. There was no evidence to suggest that treatment with sumatriptan tablets was associated with an increase in the severity of recurrent headaches. The efficacy of sumatriptan tablets was unaffected by presence of aura; duration of headache prior to treatment; gender, age, or weight of the subject; relationship to menses; or concomitant use of common migraine prophylactic drugs (e.g., beta-blockers, calcium channel blockers, tricyclic antidepressants). There were insufficient data to assess the impact of race on efficacy.