Less than two months ago, data released from AAFPRS’s annual survey revealed that the surgical lip lift procedure is on the rise. Removing a strip of skin from below the nose reduces the space and elevates the philtrum. In doing so, more of the upper lip becomes visible, and the shape of the lips improves for more of a rolled-out look. And while jaw-dropping before-and-after images that display photos of perfectly symmetrical, perfectly plump lips flood Instagram feeds, there’s a lot of insider intel about the surgery that still flies under the radar.

For starters, migrating lip filler, which often comes down to poor injection techniques, sends some patients straight to their plastic surgeon looking for a more permanent option. Migrating filler can happen to anyone at any age, and the process of injecting filler, then dissolving, and figuring out what to do next is reason enough for some patients to swear off the power of the plumper for good.

Dr. Terry Restivo, a plastic surgeon in Wailuku, HI, says there are a few reasons why lip filler can migrate. “Injecting too thin of a product is a reason it happens,” she says. “The same goes for trying to erase the little wrinkles around the mouth (smoker’s lines). Placing filler into those wrinkles has the potential to move because of all the movement in the mouth area, but it also can look bizarre.” She also says using filler to enhance the outline of the lips tends to force the product down, causing the lips to lose their edges and the borders to become distorted.

The traditional lip lift procedure is a permanent way to enhance and define the lips. It lifts (hence the procedure’s name) the Cupid’s bow and creates less ‘space’ between the base of the nose and the upper lip. As Dr. Restivo explains, there’s a natural progression of aging that occurs as the skin loses its tensile strength and becomes more relaxed as the area between the nose and upper lip lengthens. “This causes the upper portion of the lip to look thinner,” she adds. However, for all the good lip lifts provide, Dr. Restivo points out that the procedure’s goal is to shorten the distance, not necessarily add volume.

Why a lip lift may not be right for younger patients

Despite the recent traction lip lifts are garnering, the procedure isn’t new. In fact, the lip lift has been around for several years, and surgeons often perform it in conjunction with a facelift. Now, it’s being done as a standalone procedure. But the previously under-the-radar surgery has been experiencing an uptick due to its newfound social media status and younger patients who want the procedure, whether or not they’re the victim of migrating lip filler.
Dr. Restivo says the best candidates for the lip lift are those who experience signs of aging to the lip. “It works really well in older patients,” says Dr. Restivo. That’s partially because older patients tend to have better resulting scars than younger patients. After all, the scar heals relatively well in more mature skin, making it less noticeable. 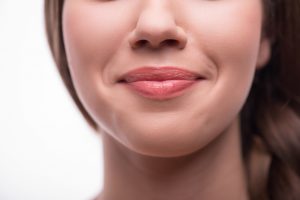 While a lip lift provides a long-lasting natural youthfulness to the lips, Dr. Restivo points out that the procedure is more of an anti-aging procedure than anything else. Because the surgery shortens the distance between the nose and lip, older patients often have longer lips due to volume loss compared to younger patients, which is why they may not get the same type of result.

What a lip lift accomplishes is different from lip filler. Dr. Restivo says it’s essential to understand this because if your lips require volume, filler may be necessary in addition to surgery. “When we expose the red portion of the lip in a lip lift, there’s more canvas there, but it may look a little deflated and require some volume,” she says.

So what about patients who are tired of repeat injections? Or those that can’t achieve the desired effect they want from fillers? In those cases, a lip lift may be deemed more appropriate and provide the end result they want. However, there is some encouragement for younger patients to undergo surgery to redefine the lips with a lift although it’s not necessarily always the most appropriate procedure for them.

The lip lift may reign supreme, but it’s not the only way to add definition to the lips and improve their appearance. The famous lip flip, which uses neuromodulators like Botox (with or without filler), also enhances the size and shape of the lips. However, it differs from a lip lift because it does not add height to the lip but instead relaxes the tiny lip muscles to ‘flip’ out the upper lip—it also helps reduce the look of a gummy smile.

Whichever route you choose, make sure always to seek out treatment with only a board-certified plastic surgeon who can fully explain the nuances of each lip procedure and help you decide on the best solution for your specific needs.