Last week, the World Meteorological Organisation (WMO) published its predictions that the world faces a 50 per cent chance of warming by 1.5 degrees above pre-industrial levels by 2026

The 1.5 degree is ‘an indicator of the point at which climate impacts will become increasingly harmful for people and the entire planet’ said WMO head, Prof. Petteri Taalas. The last fortnight also saw the publication of a new report by the World Health Organisation (WHO) that obesity in Europe has reached ‘epidemic proportions’ causing at least 200,000 cancer cases and 1.2 million deaths per year. Almost a third of children and 59 per cent of adults in Europe are now overweight or living with obesity.

‘We live in a world where we have easy access to cheap and delicious food and where it’s really easy to be sedentary all day,’ co-author of the report Julianne Williams, WHO’s technical officer for noncommunicable diseases, said.

‘We know our children are being barraged with advertising, increasingly in the digital world, even when they’re on video games, they’re seeing ads for foods high in fat, sugar, and salt,’ adding that Europe’s low breastfeeding rates were another risk factor associated with higher levels of obesity.

In modern times, gross domestic product (GDP) has become a measure for a country’s wellbeing. If the economy is growing, then things must be good. If it is shrinking, then not so much. Using GDP to measure how well we are doing, is increasingly at odds with reality.

In the last five years, with the rise of Donald Trump, the British vote for Brexit and the success of unconventional parties in Europe, both on the right and left, previously cherished institutions and ideals have been shaken to the core.

The origin of this ‘age of anger’ is unclear in countries that, by conventional measures, have never been richer. The common thread seems to be that people do not see the reality if their lives in the official picture. Some of the forces at play seem to stem from a lack of identity, along with lack of affordable housing, healthcare, childcare, rising levels of inequality and the erosion of tight and resilient communities.

GDP measures production of whatever kind, good or bad. This includes flooding the market with cheap unhealthy food, or the costs of cleaning up pollution, wildfires, or storms. It does not count transactions where no money changes hands. It doesn’t like housework, (who does?) and it has no interest in volunteer activities. It struggles to make sense of modern service economies – this is a problem in rich countries where services like hairdressing, psychotherapy and interior-decorating dominate.

There is an acute sense that something is not right, but it is difficult to put a finger on it. Prior to the financial crisis of 2008, the global consensus was that the markets should be left alone to create wealth.

A key problem with growth is that it requires endless production and its close companion, endless consumption. To prevent growth stalling, we need to buy more and more things and more and more 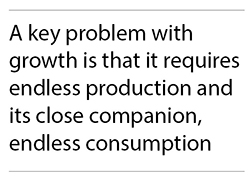 paid experiences. For economies to continue to ‘grow’ we need to have insatiable consumption. In our heart of hearts, we know this consumption is mindless madness.

We buy stuff we never knew we wanted, and never use again. Open any kitchen cupboard and unearth a range of gadgets – some of them still in their box or the circular exchange of unwanted expensive gifts at Christmas. We know that gadgets have parts that are irreplaceable. When they do break down the only option is to discard them and buy more.

Another problem with economic growth is that its rewards are not evenly shared. Average income is calculated by taking the size of a country’s economy and dividing it by the number of people living there. This is deeply misleading. If a large proportion of wealth is created by 1 per cent – as is the case in many rich countries through increases in stock values and land – many people are left working harder and harder to maintain their living standards, and end up questioning what all the growth is for?

It was left to a fifteen-year-old, Greta Thunberg, to point out the ‘fairy-tale of economic growth.’ The tool we are using to measure progress is wrong and if the tool is wrong or insufficient, then government policy to maximise growth, is wrong or insufficient as well. The pursuit of growth leads to policies that insist on longer working hours, public services being slashed, or greater inequality. In environmental terms the pursuit of growth is leading to the collapse of biodiversity and greenhouse gas emissions that threaten the very planet on which our wealth depends.

The lens of GDP is too narrow a lens to view the world.

So how can the lens on which we measure growth be expanded for a modern economy? A good economy allows people to be healthy and happy with life and avoids storing potential sources of long-term trouble such as extreme inequality, environmental collapse, and poor health. How can this be measured within the context of economic progress?

The World Economic Forum acknowledges that GDP is no longer an accurate measure of growth. Post-pandemic recovery requires a more comprehensive definition of economic success. Yet, despite long standing efforts to redefine economic progress, reverting to conventional growth in GDP remains the reflex response of most governments, including Ireland.

A dashboard for a new economy is proposed that incorporates the dimensions of prosperity, planet, people, and institutions. This approach would formulate a balance between economic, environmental, health and social targets and consider them as inextricably linked. It would address the close interconnections between the different dimensions of economic progress and wellbeing – such as the health and economic outcomes in the current Covid-19 crises.

It is envisaged that some of the targets included will be drivers of productivity and GDP growth, such as public health outcomes and educational attainment; while certain environmental targets may present trade-offs with increasing GDP or carry distributional consequences depending on how 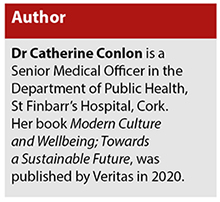 they are pursued. The impact of cutting the national herd is a good example of a trade-off between economic prosperity and environmental sustainability.

The advantage of a dashboard approach is that it strikes a balance between being comprehensive and at the same time concise enough to serve as a mental model for thinking about recovery and future progress.

The World Economic Forum has attempted just that with its report, Dashboard for a New Economy Towards a New Compass for Post-Covid Recovery (October 2020) which outlines a framework for macroeconomic metrics that could convert the current fairy-tale of economic growth that is inequitable, ruining our physical and mental health and destroying the planet; into a future path for doing business that is efficient as well as addressing the key principles of equity, sustainability and health.

Economics has presented a distorted view of the world with the constant emphasis on economic progress as measured by GDP. This model has failed us, leaving behind an unequal, unhealthy, dissatisfied world on the brink of environmental meltdown. Let us take stock and measure what matters before it is too late.