Prof. Carl June, who treated the first patient with CAR T-cell therapy, gives his predictions on the future of the treatment

The future of CAR T-cell therapy is synthetic biology and gene editing, according to one of the pioneers in the field, Prof. Carl June. Prof. June is Professor of Immunotherapy at the University of Pennsylvania, and is director of the university’s Center for Cellular Immunotherapies and the Parker Institute for Cancer Immunotherapy.

He is considered the father of CAR T-cell therapy. His team were the first to administer CAR T-cell therapy and his work on CTL019, which would later become tisagenlecleucel, led to the approval of the first gene therapy. The first treatment was administered to a patient with a diagnosis of p53 mutant chemo-refractory leukaemia. Ten years later, he is still in remission.

At the recent 4th European CAR T-cell meeting, Prof. June reported on the 10-year follow-up of the first two patients to receive tisagenlecleucel. Both patients had CLL and were complete responders, becoming B cell aplastic. Initially both showed a very rapid proliferation of the CAR cells that developed into a persistent state, which has been very durable.

The treatment was derived from a mouse model which had both CD4 and CD8 T cells. Interestingly, in the long term, both patients became CD4 dominant. There was early expansion of cytolytic gamma-delta CAR T cells.

Prof. June said a lot has been learned from studying these two patients over 10 years. Firstly, he said, it shows that a subset of patients with refractory chronic lymphocytic leukaemia (CLL) and 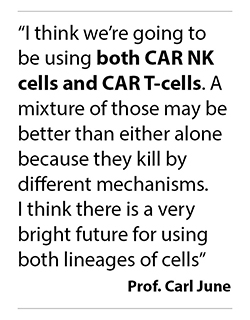 acute lymphoblastic leukaemia (ALL) have durable remissions after tisagenlecleucel. The research also revealed that the 4-IBB signalling domain promotes long-term persistence and showed that long term, CAR T-cells remain functional and maintain homeostasis by continued proliferation and a negative regulatory mechanism which leads to a persistent but restrained anti-B cell response.

Gene editing
But the future is in gene editing, Prof. June said. There are an increasing number of tools available to edit genomic DNA, including zinc finger nucleases, TALENS, meganucleases and CRISPR-Cas9. This creates a myriad of possibilities, including inducing disease resistance, enhancing dT cell function and preventing graft versus host disease.

Treatment was associated with durable engraftment with edits at all three genomic loci. Modified T-cells persisted for up to nine months. Off-target edits were rare but chromosomal translocations were detected. The study demonstrated the feasibility of CRISPR gene editing for cancer immunotherapy.

Research has also shown the expansion of clonal CAR T cells in patients. In 2018, Fraietta et al published the case of a 78-year-old CLL patient who had a complete response cytokine storm but all the expanding CAR T cells were CD8 with an integration site into the TET2 gene. Although the initial infused product was polyclonal, progeny derived from a single CTLO19 TCRVb5.1 CD8+ T cell was responsible for the eradication of massive tumour burden.

Subsequent studies have shown that it is possible to intentionally knock genes into TET2 and also retract locus and that enhances proliferation. Intentional dual-knock in to TRAC and TET2 leads to enhanced proliferation, decreased checkpoint expression and improved anti-tumour activity.

There is a whole new avenue of research now which is looking at the long-term integration in patients to identify genes that may either be safe harbours or lead to enhanced function when knocked out by insertions, Prof. June said.

Solid tumours
Although CAR T-cell therapy has revolutionised the treatment of haematological malignancies, the results from trials in solid tumours haven’t been as successful, the professor acknowledged.

“Blood cancers have many promising approaches right now. It’s mostly engineering now by the field to get these clinically approved and bring them into clinical practice,” he said. “With solid tumours the results have been disappointing in most trials to date and I think that’s what we need to focus on.”

June’s lab has recently developed a new in vitro model to study CAR T-cell dysfunction using a CAR targeting mesothelium. The cells were then exposed to pancreatic cancer cells for a period of a month. The team studied the dysfunctional mechanism in these CAR T-cells and contrasted this to the exhaustion seen in chronic viral infections. What they found was that there were a number of genes that were induced within three weeks in chronically induced CAR T-cells. A few of these were surprising, he said, including transcription factors SOX4 and ID3, which are not normally expressed on CD8 CAR T-cells. When they looked at the pathways involved, three of the top five pathways in the dysfunctional CAR cells were the same as those seen in natural killer (NK) cells. Presenting the findings in Cell last year, the team concluded that there was plasticity in these cells induced by the pancreatic cancer cells.

Combining data from studies on CAR T-cell therapy in solid tumours – non-small cell lung cancer (NSCLC), colorectal cancer (CRC), hepatocellular carcinoma (HCC), and melanoma – has identified a common group of 18 TIL markers. The results suggest that CAR T-cells, when exposed to solid tumours, have dysfunction and some of this is shared with what happens in the tumour microenvironment of solid cancer with endogenous T-cells but some of it is unique to CARs where the induction of dysfunction and expression of many NK molecules, leads to an inability to kill pancreatic cancer cells over a period of two to three weeks.

The hypothesis, he said, is that knocking out SOX4 or ID3 can restore – at least partially – the killing ability of the cells so they become resistant to that type of dysfunction.

NK cells have a lot of potential advantages, Prof. June said, because they don’t have a T-cell receptor and, hence, won’t cause graft verses host disease, meaning they could be used with both allogenic and autologous cells.

“I think we’re going to be using both CAR NK cells and CAR T-cells. A mixture of those may be better than either alone because they kill by different mechanisms. I think there is a very bright future for using both lineages of cells,” the professor said. He predicts that gene editing in addition to gene knock-ins is going to be the future of CAR T-cell treatment. “There’s a lot of complexity about that but it will be used, I think, for many applications beyond cancer,” he said.

Prof. June said research on CAR T-cell therapy to date has shown that the cells that deliver the effect may evolve in patients and that the cells driving toxicity or efficacy may not be the same as the product infused.

There are currently an estimated 900 ongoing clinical trials involving CAR T-cell therapy, but the landscape is changing. In March 2021, CD19 trials accounted for just 41 per cent of CAR trials listed on clinicaltrials.gov. Novel targets are now being explored including BCMA, EGFR and HER2.

It will be interesting to see how far the field progresses by the time of the 5th European CAR T-cell meeting next year.