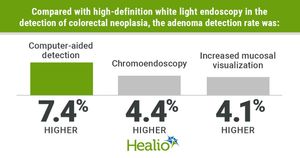 Detection rates for colorectal neoplasia were higher among computer-aided detection techniques vs. chromoendoscopy, according to research published in the Lancet Gastroenterology and Hepatology.
“Novel systems based on AI algorithms, also known as computer-aided detection (CADe) tools, have recently been developed, with the aim of improving the detection of colorectal neoplasia. … Unlike other advanced endoscopy imaging technologies, CADe fully automates the process of facilitating detection as the endoscopist passively receives the signal to inspect a suspicious area without the need