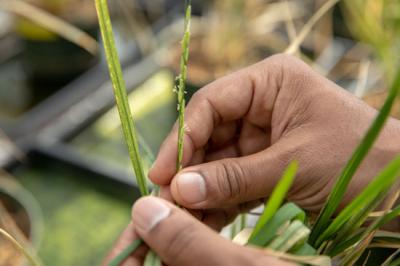 The first specific inhibitor for an uncontrollable plant pest, the witchweed Striga hermonthica, has been developed through an interdisciplinary KAUST collaboration led by agricultural scientist Salim Al-Babili and structural biologist Stefan Arold.

Witchweed is a parasitic plant that attaches to the roots of cereal plants, stealing their water and nutrients. It affects more than 60 percent of farmland in sub-Saharan Africa, and is spreading across other areas, including Asia, Southeast Europe and Saudi Arabia. The global commercial cost exceeds 7 billion US dollars.

Striga and related species have become one of the most serious threats to global food security,” says Imran Haider, part of the KAUST team. The magnitude of its destruction led the Bill & Melinda Gates foundation to award substantial funding to the research team, which includes researchers in the biological sciences and those from the Computational Bioscience Research Center and Core Labs units.

“The breakthrough was fortuitous,” says researcher Umar Hameed, whose team was studying the molecular structure of a cell membrane receptor protein involved in the germination of Striga seeds. This protein, ShHTL7, must bind to natural plant compounds called strigolactones during seed germination. While working to determine the structure of ShHTL7, the researchers used the molecule Triton X-100 to assist preparation of samples of the protein.

“We noticed that our ShHTL7 molecules always had Triton X-100 bound to them,” says Hameed. The next crucial discovery was that this binding of the Triton X-100 molecules inhibits the germination of the Striga seeds, acting as an antagonist by preventing the natural strigolactones from binding.

We soon realized that we had stumbled upon the first lead compound that could inhibit Striga seed germination without also affecting the host plant infected with Striga,” says Haider. A lead compound demonstrates useful biological activity that can be refined by developing structurally similar, but more effective, compounds.

Hameed and Haider, under the supervision of Salim Al-Babili and Stefan Arold, are using their results as a stepping stone to develop more potent inhibitors that will bind more tightly and permanently to the site that Triton X-100 has identified.

The researchers believe that this success is a great demonstration of the power of structural analysis of proteins in identifying compounds that can selectively bind to proteins to inhibit their activities. They hope this approach can be applied more widely.

Another target on their radar is the Orobanche (broom-rape) parasite that infests commercially significant crops, such as tomato and sunflower, in the northern hemisphere.