Most of the current senolytic development programs focus on small molecules, peptides, and the like. These are expensive to adjust, and will be tissue specific in ways that are probably challenging and expensive to alter, where such alteration is possible at all. In comparison, Oisin Biotechnologies builds their treatments atop a programmable suicide gene therapy; they can kill cells based on the presence of any arbitrary protein expressed within those cells. Right now the company is focused on p53 and p16, as these are noteworthy markers of cancerous and senescent cells. As further investigation of cellular senescence improves the understanding of senescent biochemistry, Oisin staff could quickly adapt their approach to target any other potential signal of senescence – or of any other type of cell that is best destroyed rather than left alone. Adaptability is a very valuable characteristic.

The Oisin Biotechnologies staff are currently more than six months in to a long-term mouse life span study, using cohorts in which the gene therapy is deployed against either p16, p53, or both p16 and p53, plus a control group injected with phosphate buffered saline (PBS). The study commenced more than six months ago with mice that were at the time two years (104 weeks) old. When running a life span study, there is a lot to be said for starting with mice that are already old; it saves a lot of time and effort. The mice were randomly put into one of the four treatment groups, and then dosed once a month. As it turns out, the mice in which both p16 and p53 expressing cells are destroyed are doing very well indeed so far, in comparison to their peers. This is quite impressive data, even given the fact that the trial is nowhere near done yet. 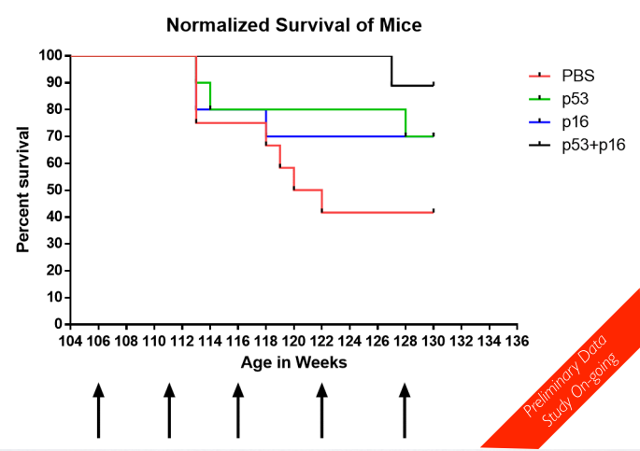 The image presented here is taken from the Oisin Biotechnologies PDF that accompanies a presentation given at the recent ICSA meeting in Montreal. We should certainly hope to see more of this sort of thing in the years ahead as senolytic technologies improve.