A 34 year old man was admitted to hospital with a history of progressively worsening abdominal pain associated with loss of weight. Clinical abdominal exam elicited left iliac fossa pain, but was otherwise normal. Blood tests were unremarkable. A CT KUB at presentation for suspected renal colic was performed and demonstrated a 5cm lesion in the descending colon involving the submucosa. A lumen filling lesion at the splenic flexure was confirmed at subsequent colonoscopy.

Laparoscopy was performed four months later and no masses associated with the colon were identified. An ‘on-table’ repeat colonoscopy identified no abnormalities other than an 8mm elevated area of mucosa in the distal transverse colon. A follow up CT virtual colonoscopy showed no evidence of a submucosal lesion. The patient currently remains asymptomatic.
A+B: side by side image of CT at admission and CTVC following on table colonoscopy
C+D: endoscopic images of stalk and of large necrotic lumen filling mass

Question:
What is the diagnosis and by what mechanism did the mass resolve? 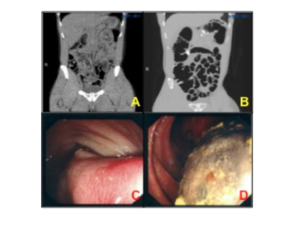