New York City had no A grade hospitals, only four got Bs, and nationally known hospitals such as New York Presbyterian (Columbia and Cornell), New York University, and Mount Sinai received C grades. 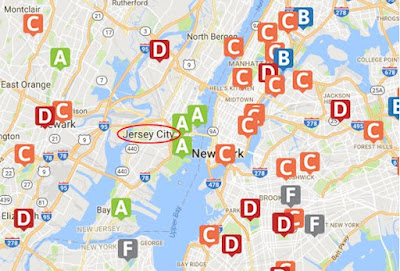 CarePoint has figured out how to achieve a top rating but can’t compare to the numbers of California Kaiser Foundation Hospitals scoring well on multiple Leapfrog evaluations. The current rankings show 19 of 26 Kaiser hospitals in California were A rated.

Of New York State’s 142 hospitals participating in Leapfrog’s ratings, only seven managed to get A grades. All but one were upstate; the other was on Long Island. The state also had three hospitals with F grades—two in Brooklyn and one in Staten Island.

Despite the presence of numerous A rated hospitals in New Jersey, I’m heading for one of the major teaching hospitals with C safety ratings if I ever get sick in New York City.

The authors, from Harvard and Mass General, analyzed the records of over 19,000 Medicare patients discharged after AMI from 171 diverse hospitals and linked them to Agency for Healthcare Research and Quality (AHRQ) patient safety surveys for each hospital. These surveys involved staff responses to three or four questions each on 12 different safety domains.

Domain, average, and composite scores for responses were calculated and compared to mortality after adjusting for patient comorbidities and hospital factors like size and teaching status.

The paper concluded “Based on safety culture survey data from a large, geographically diverse sample of hospitals, and using CMS [Centers for Medicare and Medicaid Services] risk models for AMI mortality, our analyses could not detect any association between safety culture and 30-day risk-adjusted mortality. These findings are relevant, as hospitals devote considerable time, effort, and money to administering and analyzing survey results, communicating these to staff, and designing programs to address low scoring areas, all in an effort to improve safety. If the culture-outcome association is not robust, then perhaps these resources might better be used in other ways.”

That’s a nice way of saying hospitals are wasting time and money on these surveys.